Fresh off their first guest bedroom win on The Block, Jesse and Mel shared their winning tips with fans at the Home Show.

Day in the life 👷‍♀️

Being on the Block is not a glamorous affair. By Sunday morning, host Scott puts the tools down and gives you a ‘day off.’ But this ‘day off’ is anything but relaxing. You’re showered, dragged into hair and makeup, then sat down for the master interview.

Mel recalls the three-hour interrogations, “The producer will say ‘so, on Monday, this happened’, and I said no it didn’t, that happened a month ago! And they said ‘No, that was literally 5 days ago!’

Immediately after the grilling, you eat dinner (from the grill) and then it’s judging time (more grilling). Just when it’s time for bed, you need to brief the producers on your plans for next week’s room. You might need to shower again by this point.

When the new week begins, Jesse and Mel only have Monday, Tuesday and Wednesday to create their room. After three days, they must reveal their design to the judges. How did they manage it?

Mel revealed their secret recipe, “We wake up Monday morning and spend 2 – 3 hours planning. We get our builder, plumber and electrician together and sit down with them. Then we draw out different options and come to a final decision. We lock it in so nothing can go wrong.”

One reason for the impeccable planning is to stop any last-minute changes. Altering the floor plan on a bathroom will upset tradies, raise costs and delay progress. After all, no-one wants to redo something twice!

But with Block life, it’s Block rules. Jesse and Mel found this out the hard way when judge Keith confessed that NSW legislation needed two floodways’ (vs one for VIC) at the last minute. They rushed to get a plumber back on-site, delaying the process and ultimately leaving the room unfinished.

Jesse held no punches when confronting Keith, “You wouldn’t let it happen in real life, so don’t let it happen on The Block. Kids out there, stand your ground!” Keith later announced on TV Week that he deliberately holds information from contestants. Our power couple vowed to learn from their mistake and ask more questions right off the starting line.

After much controversy, how did they win the guest bedroom? The answer lies in strategy and planning. And with $140k in cash on the table, there is no time to waste. They decided to create a room that could be finished 100% on time. Eliminating any risky features, gimmicks or planning permission that could hold up the project.

However, the old room contained a fireplace, which proved extremely difficult to build around. Instead of tackling the tricky centrepiece, a decision was made to plaster a false wall over it. The result was one less wall to plaster and more time in the bag.

Yet, this was still technically challenging as Jesse admits, “When we sent through the order, we had no floor, no wall and no ceiling. We had to allow for the thickness of the carpet, corners, skirting boards, cabinetry, plaster and studs. Everything had to be millimetre perfect.

“What you guys didn’t see, is when the panels went on, it fit flush to the millilitre. That was the first time Keith gave me a pat on the back!”

A passion for period 👑

Being St Kilda based, Jesse and Mel hold a soft spot for period detailing. St Kilda was once a bustling suburb for Melbourne’s elite during the Victoria era. Palatial mansions and grand terraces scattered the waterfront, as iconic now as ever before. 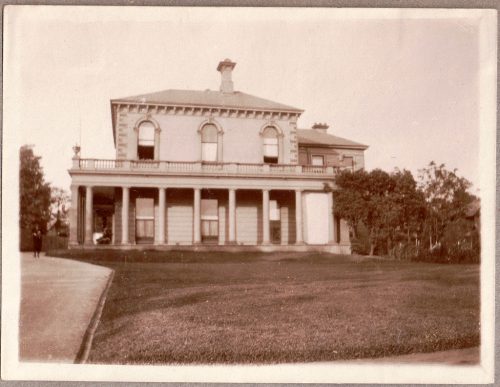 Jesse believes some buyers expect this attention to detail, “Anyone who buys a Victorian terrace, wants to see period detail; otherwise they would buy a contemporary townhouse.”

“When you turn a house upside down, what sticks, stays. Artwork, furniture and styling items go with the owner. So, make sure your fixtures and fittings are quality.” Advised Jesse, who is a big advocate for luxury finishes. But how do we create luxury on a budget?

Before filming The Block, Jesse leveraged his estate agent powers to show Mel multi-million-dollar homes in the area. He asked her ‘what do these places have in common?’ The answer? Big slab floor tiles on the wall, chrome fixtures and high-quality fittings. ‘A home built to be sold should be simple and elegant,’ he said. The danger of using exotic accessories is that 1% might love it, and 99% hate it.

Luxury is bespoke. Luxury is one of a kind. Jesse and Mel’s designs are testaments to luxury. By freeing up their limited budget, they invest heavily in luxury fittings to wow the judges. Examples include a $5,000 custom door weighing 100kg or custom cabinetry costing $8,000 for just one room.

Know your market. Jesse recommends visiting your target suburb and viewing the highest-priced property. Use Domain or Real Estate to see what’s selling well and replicate that success. For instance, the hipster capitols of Melbourne, Fitzroy and Carlton, love the industrial look. Yet, traditional areas like Toorak are into marble oak and timber veneer.

Whether you’re into renovations, improvements or new builds, timing is everything. For Jesse and Mel, most progress was made when Keith and Dan went home. They would turn up the music and help the tradies, without the added pressure of cameras.

They also figured they were unlikely to win back-to-back rooms on The Block. For this reason, they would focus time and energy on getting every second room absolutely perfect. We’ve heard Keith saying ‘play the game’, but it seems like this couple is ‘gaming the game’.

Yet, as dramatic as The Block seems, there was a team spirit between the couples, “there was more competition against The Block, then against other couples” admitted Mel. Sharing plaster and other materials gave a sense of family values. As with any building site, sometimes supplies go missing, or you underestimate an order. Therefore, as a rule of thumb, always order 10% more than you need. Not only perfect for a sausage sizzle, but Mitre Ten also proved reliable suppliers, capable of delivering next-day, if ordered before 5pm.

Mel and Jesse’s ‘power’ status comes from their polarised strengths and weaknesses. Mel is logical, practical and good with money. Whereas Jesse understands styling for the emotional buyer. Without their opposite energies, they would be either over budget or under styled.

“The most expensive way to renovate a house, is the way we do it on The Block,” said Jesse. Tradies must be on-site long hours to finish a room in three days, which gets costly. For that reason, any time a tradie isn’t working is money wasted. So, the couple with dexterous management skills will likely win.

While Jesse ‘loves to spend money’, Mel crunches the numbers. Everything is tracked in a spreadsheet: tradies’ time, materials, sponsor vouchers and spending. Meanwhile, Jesse uses his experience to build everything from bulkheads to flooring, saying ‘don’t rely on your trades to do everything.’

You have to drive a hard bargain to keep costs low. Like a middle-eastern bazaar, you have to be persistent and keep negotiating. They haggled the tradies down to $50 an hour and demanded discounts from suppliers. Jesse said, “It’s funny when you finish The Block, you go up to everyone and say ‘I’ll have 50% off that’ and they’re like ‘Who the &$#& are you?’”

Mel plugged sponsors (and Home Show exhibitors) Freedom who offered the quality of a $6,000 sofa at a fraction of the cost. She remarked, “That sofa’s very similar, and I’m paying a quarter of the price with Freedom.”

Blockheads should tune into the full live stream (below) for all the secrets, stories and tips from the show.